While surveillance of citizens is increasingly common around the world (did you hear about the recent Wikileaks revelations?), it stirs debate around one important question: how bad is it to live in a mass surveillance society? The answer is simple: __when we know we may be under surveillance, we become dull, we dare not speak, think or even act for fear of being judged. __

To get a better understanding of this, I could refer you to Michel Foucault’s (fastidious, but important) reading. Foucault is a famous French philosopher and author of “Discipline and Punish”, a reference book on the subject. But for English speakers, one should turn to Glenn Greenwald and his TED talk, aptly titled “Why privacy matters”.

Here is an excerpt:

Now, there’s a reason why privacy is so craved universally and instinctively [...]: when we’re in a state where we can be monitored, where we can be watched, our behavior changes dramatically. [...]a society in which people can be monitored at all times is a society that breeds conformity and obedience and submission, which is why every tyrant, the most overt to the most subtle, craves that system. Conversely, even more importantly, it is a realm of privacy, the ability to go somewhere where we can think and reason and interact and speak without the judgmental eyes of others being cast upon us, in which creativity and exploration and dissent exclusively reside, and that is the reason why, when we allow a society to exist in which we're subject to constant monitoring, we allow the essence of human freedom to be severely crippled.

Reuters reports about a scientific study, dating back to April 2016, “Chilling Effects: Online Surveillance and Wikipedia Use”. The study confirms, with supporting data, the tendency to self-censorship, when one feels under surveillance.

The study focuses on the evolution of the audience of Wikipedia US, and more particularly on pages whose content linked to terrorism. They are also followed by the US Department of the Interior over a period of 32 months, such as “Jihad”, “Al-Qaeda”, etc. These pages, on current topics, were more and more visited until the Snowden revelations, which made the public aware of the fact that the NSA monitors on-line communications as much as it can. At that point, the audience of the said pages has dropped very significantly (2.7 million monthly visits before the Snowden revelations, 2.2 million, or 500,000 visits less), during the following months. The graph speaks for itself: 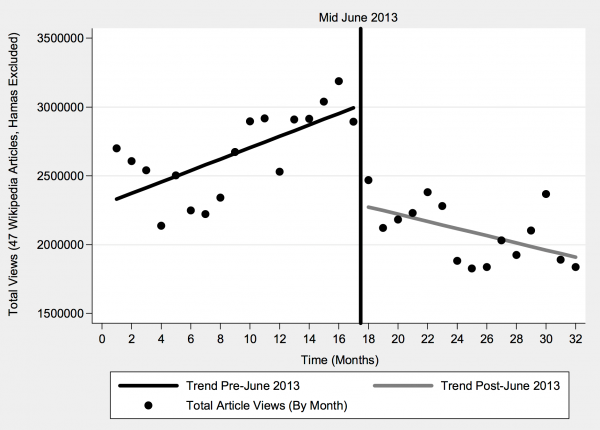 Thus, even without being aware of it, the fact that awe could potentially be monitored makes us hesitate to learn about certain topical subjects, even if it is legal and even healthy for democracy. In this period of fake news and “alternative facts”, need to keep abreast of the facts. But how can we do this if we dread even reading Wikipedia?

This is why it is fundamental to fight mass surveillance and protect ourselves against it. Surveillance is made possible by new digital technologies, but the way we use these technologies can help it. Indeed, monitoring all communications is much simpler and cheaper when everyone stores their data in one central location and uses the same communication tools. A network without a center and without compulsory crossing points is much more difficult to spy on. Redecentralizing the network is also a great way to oppose the panoptic, to recreate places where we will be protected from Big Brother's gaze, places where we will again be free to think and express ourselves. This is one of our goals at Cozy Cloud: we intend to help building a world where mass surveillance would be almost impossible because it is too costly. In such a world, freedom and privacy would be protected.

Cozy Cloud
—
The chilling effects of mass surveillance
Share this